In preparation to returning to the club racing scene, I noticed that my old helmet was nearing the end of its WERA-mandated lifespan.  Also, after roughly four years and nine million laps, it smelled like a sixpack of ass.   It was a good run, but it was time to replace it, so it was retired to the Helmet Shelf of Years Past.

Side note:  Why do we save old helmets?  I think I still own every helmet I’ve ever bought (for myself, anyway).  Anyway, on to the review:

Scorpion announced the EXO-R2000, its first track-focused model, sometime in late 2012.  It was originally slated to hit our shores in Spring 2013, which turned into Summer, which turned into. . . you get the idea.  Based on my then-conversations with their racer/dealer rep, they were selling every unit they could make in Europe, so they weren’t in a huge hurry to divert them to America.  A fair point, fiscally speaking, but I thought it was kind of a kick in the balls for the stateside consumer.  Luckily for all of us, the supply has caught up with demand, and they’re available.  I called the good people over at Marietta Motorsports and ordered one.

I’ve worn Scorpions (along with Arai, Suomy, and Shoei) since picking up one of their midrange models for stupid cheap at a motorcycle show about ten years ago.  After bouncing one through T2 at Talladega Gran Prix and another one on an Atlanta street in a gnarly scooter crash (don’t ask, haha), I’ve grown to trust their product as much as I do that of the premium brands.

One of the great things that Scorpion have started with this model is that they ship it with a clear and a dark face shield. The helmet bag is nice, and they’ve replaced the old, thin fabric with a heavier cloth with a soft lining.  Because I’m a huge doucher, I also ordered a mirrored face shield – the “haterblocker.” 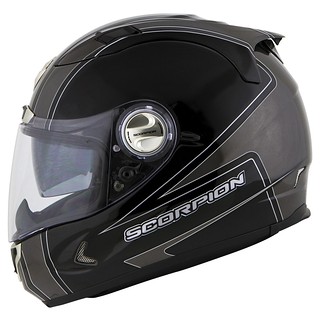 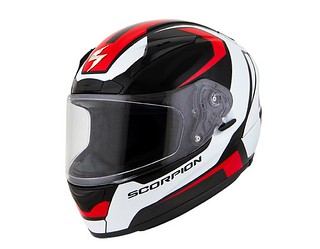 The EXO-R2000 feels a lot lighter than my old EXO-1100.  The paint is very, very good.  Until I bought this one, the best paint I’d ever seen on a helmet was my old Ben Bostrom replica Suomy.  The liners are very soft, though the crown padding felt a little loose when I first tried it on.  After pumping up the cheek pads with the chin bladder, the whole padding system seemed to work together to create a snug, but not overly tight, fit.

The shield mechanism is where I ran into some trouble with the new helmet.  I loved Scorpion’s old twist-and-go style system.  It was quick, easy to operate (even with gloves!), and never failed (well, there was the one time when I slammed the shield down hard enough to unseat it from the post, but whatever – a normal, sane person wouldn’t have trouble with it, only insane rage racers).

The new system, however, is a lot more like a conventional helmet.  You have to sort of seat the guide pin, then roll it into place.  I’m sure it will be second nature after a few months, but it made me really, really miss the old system.  There is almost zero chance that you could switch this shield with the helmet still on your head.  With that being said, there is a very good reason for the change, which we’ll cover a little later. 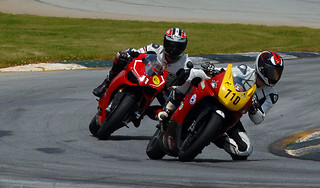 Photo Credit: Pics of You

I have to admit that, despite my efforts to do so, I was too pumped up about being on track to pay much attention to the helmet for the first morning.  Riding a motorcycle on a racetrack may be my favorite activity on the planet (welllllllll, maybe second favorite), and I was more or less ecstatic about being back out there after a too-long layoff.

After getting settled into my rhythm on the track, I started to (at least try to) pay attention to the helmet.  Firstly, it is markedly quieter than my old EXO-1100.  The shape is a little sleeker, but I think a large part of the improvement is that the new shield mechanism is almost perfectly flush with the shell, whereas the old system was extended a few millimeters into the wind.  This may not seem like such a big deal, but the mechanism is right about where your ears are, and a little turbulence at 50 mph turns into a much louder issue at track speeds.

The venting is much improved as well, which is surprising in light of the new, quieter performance.  It was hot as hell at Road Atlanta this past weekend, and I never got that heat-specific feeling of not getting enough fresh air across my face.  I hate, hate, HATE sitting on the grid before a race/session in most helmets, but the R2000 didn’t give me any problems.

(Speaking of which, do yourself a favor and get a helmet liner cleaner, such as the Motorex stuff.  No new helmet smells great, but a good cleaning, then letting it sit with the shield open for a day or so remedies that.  Just a little helpful hint from a dude who’s tried to ride in a helmet that he just unboxed, and then spend an hour breathing glue fumes and whatever else chemical badness they use in making these things.)

In addition to being quieter, I think the revised shape of the R2000 makes it a little more stable at speed.  This is especially apparent at a track like Road Atlanta; you’re more or less in full tuck for the entirety of that huge back straight.  Inevitably, you’re going to have some head wobble when you pull in and out of drafts, but, for the most part, the R2000 is a solid aerodynamic performer.

Overall, I’m really happy with my EXO-R2000.  Changing shields is going to be a pain in the ass for a while, but, honestly, I usually don’t change shields often enough to care.  It’s light, it’s quiet, and it didn’t throw me any curveballs or discomfort in two days of pretty hard track riding.  Probably the best compliment that I can give it (and any helmet, really) is that I didn’t have to spend any time getting used to it, and that I had to force myself to make mental notes about its performance.  A helmet should never be a distraction, for negative or positive reasons, and the Scorpion EXO-R2000 passes that test with flying colors.

Big Guy On A Fast Bike - A New Addiction

This page was started by a few guys who love motorcycles and road racing. We write about the motorcycle industry, racing, riders and anything else that we find interesting.

We write from our point of view, an everything you read here is based on our opinions. We don't represent anyone other than ourselves, and we're not affiliated with any organization, series, sanctioning body or political group.