Photo credit:  Pics of You

In preparation for returning to club racing, I booked two days at Road Atlanta with newly-formed N2.  I had only raced at Road A, and never felt like I had sufficiently learned the track.  Also, I was almost a year out from my last time on any track, so I wanted to make sure that I could get myself up to speed in an environment other than Saturday morning WERA practice.  So, we packed up the hauler and made the short drive over to Braselton/Winder/whoever claims the track now.

(Full Disclosure:  I once organized and administrated trackdays that indirectly competed with NESBA/N2.  That experience doesn’t have any bearing on this review, and I don’t have any reason to compete with them any longer, but I feel like I’d be dishonest if I didn’t add this caveat.) 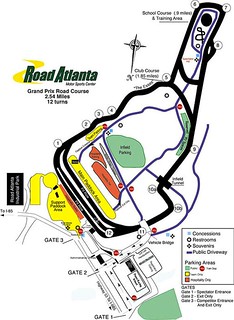 Road Atlanta is one of my favorite tracks, which is weird, because I suck at it.  Many motorcyclists don’t care for it because it’s more of a “car track” than a “bike track.”  However you want to classify it, it is a fast, challenging, and ultimately rewarding facility.  Its signature corners are T5 and the T10 complex, but the whole track is, at least in my opinion, a helluva lot of fun.  T1 is a fast right, followed by a hill climb into the chicane, and then back down the T3-4 “Esses.”  You climb the hill again into T5, a deceptively fast left that exits onto Wheelie Hill.  T6 is another fast right that you want to set up just right, otherwise you shit the bed in T7, a decreasing radius right that leads onto the monster of a back straight.  T9 doesn’t look like much until you hit it at something close to your bike’s top speed, and then you fly down the hill into a huge braking zone before the T10a-b chicane.  Many, many days at the track have ended in the gravel at the outside of T10a.  After you get on the gas out of the chicane, you may pull a small wheelie under the bridge, and then it’s back down a steep hill to T12, which has a little dip right at its apex.  After that, you roll on the throttle all the way down the front straight and do it again.

N2 is a “new” organization that, per their press release, “took over operations” from longtime trackday provider, NESBA.  By all accounts, many of the personnel from NESBA hold the same positions with N2, and they use almost the exact same structure.  I never ran a trackday with NESBA, but know plenty of people who swore by their organization and events.  On the other hand, there are plenty of opinions for the other side as well.  For example, if you’ve been to any WERA or AMA race in the past few years, you may have seen the sort-of famous “NESBA U SUX” trailer.  There’s an awesomely ridiculous story behind that, but it’s best left for another time/place.  Trackside urban myths aside, they appeared to be an experienced and competent group. 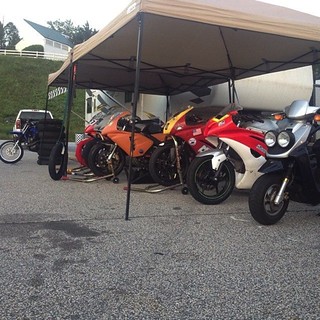 I signed up online.  It was relatively painless.  I’m always a little skeptical of trackdays that require a “membership fee.”  To me, it feels like a cash grab.  To be fair, N2 states that, as a member, you get “Crash/mechanical insurance, Free 1 on 1 instruction, and access to all N2 events.”  I didn’t care enough to investigate what they meant by crash/mechanical insurance, but the other two are things that you get gratis at almost every other trackday.  In the longview, a trackday business is a business, and businesses (hopefully) make money.  I’m a little past the point of pissing and moaning about $25.  (See Ryan’s article on the costs of trackdays & racing if you want to split hairs)

Saturday morning registration and tech were very straightforward.  Sign this, show us the bike, show us your gear, here’s your sticker, have fun.  My 250 is a little more . . .ahem . . .”weathered” than a lot of the shiny streetbikes that were in the tech line, so I got a little extra attention.  Not a huge deal, but it was a little funny that what is clearly a race bike with track-only tires got more scrutiny than a bike that was actually RIDDEN TO the trackday.

Saturday was great.  A few achingly slow parade laps to get people familiar with the track (and for me to remember how to ride a motorcycle, haha), and then we started pounding out laps.  After lunch, I felt comfortable enough to start pushing the little Ninja to race pace.

I was in Intermediate, which can be a little hairy.  Intermediates, for most trackdays, are typically the least consistent riders and have the widest variety of skill level.  Since I was on the track with everything from another 250 to a fire-breathing Panigale, it took a few laps to get used to the big bikes rocketing past me on the straights.  For what it’s worth, I don’t think I held anybody up in the turns, but everyone, for the most part (more on that in a bit), played nice. 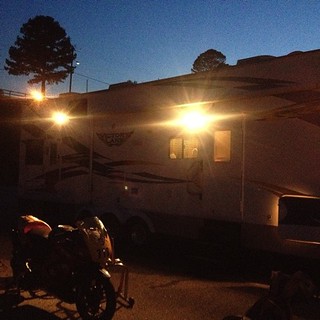 Sunday was much the same. . .except I ran out of gas in the first session.  Womp womp.  Crash truck, pageant wave, the whole nine.  Because, like all tracks in the South, Road A has “quiet time,” there was only one session in the morning anyway, so no big deal.  In the afternoon, as usually happens, the speeds picked up, and guys started taking bigger risks with their bikes and limits.  Having already done a whole day, I was accustomed to getting strafed on the back straight and/or catching guys at their braking points going into a few turns.

With that being said, it got a little cowboy out there.  I had a control rider wave a rider around me going down the hill into T10a.  I didn’t see the guy until he came up beside me and jumped on his brakes.  I still had 20-30 yards of WOT, but the other rider looked pretty wobbly, so I gave him the space.  And then he tried to give me the space.  The end result was me almost taking a gravel bath and both of us going through the chicane at about 25 miles per hour.  To be clear, this happens a lot.  The issue that I had/have with it, though, is that the CR waved the guy by in one of the biggest braking zones in the country.  I’ve gone through that turn elbow-to-elbow with other racers, but it’s just not a safe place for a wave-around at a trackday.  Anyway, I talked to the guys at the N2 tent, and they handled it with no drama, so kudos to them. 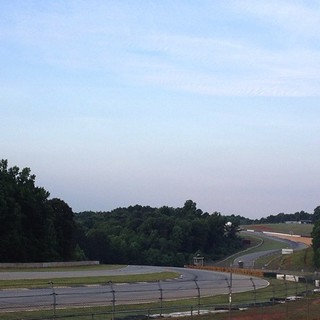 A few sessions later, a rider passed me on the front straight and looked pretty crossed-up going into T1.   I made it a point to roll off so I could let him put some distance between us in the chicane & Esses sections.  As soon as I cleared the chicane, the red flags flew out.  It’s the sort of thing that you hate being right about.  A CR passed me in the Esses, and then we saw the crashed bike on the far right of the track, with the rider on his back in the gravel.  The CR slowed to 10-15 mph, looking at the crashed rider and bike.  Without too much thought, I swung around the nearly-stopped CR and continued.

I’ve seen a ton of red flags, both racing and doing trackdays.  A few of those have involved a clearly-hurt rider like this one.  So, I did what you’re supposed to do:  I made my way around the track at a brisk, but nowhere close to race/trackday pace, and got the hell off the track so they could send out the ambulance.  As I pushed my bike into the pits, the CR caught me and asked me why I thought it was okay to pass him on a red flag.  I explained to him what I did and why, he kind of rolled his eyes, and then rode off.  End of story.

(Side Note:  I’ve never really bought into the whole trackday-cop attitude that some CRs get.  It’s not an easy gig; I’ve done it for years, and been the guy that hires them more than once.  The guys who are great at it don’t succeed because they’re super-fast riders, but because they are level-headed and good communicators.  If someone is truly out of control and dangerous, then, yes, you need to have a serious conversation with them.  If they pass you because YOU were doing something as dumb as rubbernecking at a crash on a hot track, then suck it up and don’t compound the issue by bringing your ego into it.) 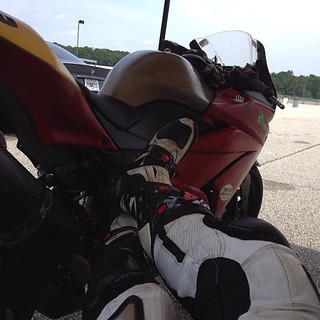 N2 runs a good trackday.  Lots of available time, not a lot of downtime.  They bring in good people to add to the experience, like techs from well-respected shops and excellent photographers (even when a scheduling snafu brings two and one goes home).  The control riding was competent, except for the two moments mentioned above.  Road A is always fun, with a great mix up fast and technical sections.  Given the chance, I’d do another day with them, especially at Road Atlanta.

Big Guy On A Fast Bike - A New Addiction

This page was started by a few guys who love motorcycles and road racing. We write about the motorcycle industry, racing, riders and anything else that we find interesting.

We write from our point of view, an everything you read here is based on our opinions. We don't represent anyone other than ourselves, and we're not affiliated with any organization, series, sanctioning body or political group.